Urad Dal Vada, Repentance and a contest for this story.

Tried and tasted by Nivedita
Hi All,
My trial to polish myself and check whether I can write a fiction. I tried last month also and was successful with real story. This time it is a fiction with my imagination.I hope you all will like it and encourage me to write in the future also. 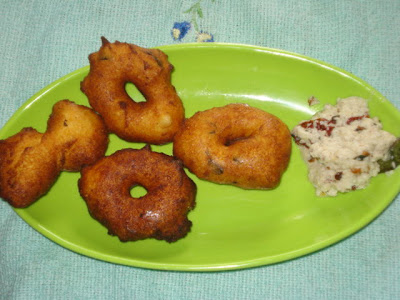 Soak the Urad dal for 2 hours (do not soak more time, as the Vada absorbs more oil). If adding raw rice, soak it with dal only.
Drain the water, add green chilly, ginger, cumin seeds, curry leaves and grind into fine paste. Do not add water at all. If you feel it’s not getting fine paste, then only add a tbsp of water.
Transfer the paste in a bowl. Add salt, rice flour (if using), coconut pieces and pepper corns.  Mix well.
Heat oil in a thick bottomed kadai.
Take a leaf or thick plastic or aluminum foil. Sprinkle water on it.
Take little batter (a big lemon size). Keep on the foil.
Press and make hole in the middle to give Vada shape.
Slowly transfer it into your palm, and slid it into hot oil.
Take care as if you hurry the oil will splash out and you may burn your fingers.
Vadas are ready to eat with your favorite chutney and Sambhar.
Sending this to
Of Chalks to Chopsticks hosted by Jaya ,an event started by Aqua.
Now coming to the contest,
I am happy with the ending of this story, but I want to know about other endings also. I need you to read the story and give another ending.
There are two options,
1.Either you take the original story till Sukanya comes to her parent's house. Give a twist to it and end it in some other way.
or
2. take the original story till he sees her in the restaurant, and continue to give some other ending.
Hope you all will think some other ending for it and send it to me.
The contest ends on September 20th.
Send the details to nivedita.mt@gmail.com with subject as "End of Repentance" with
Your name :
Your blog name:
url of the post :
Non bloggers are also welcome. Send the details to the above mail.
Keep Smiling,
Posted by Nivedita Thadani at Sunday, August 29, 2010 7 comments: Links to this post

The boy who never listened!

Tried and tasted by Nivedita
Hi All,
Past one month, my younger daughter never sleeps without this story then followed by another story"Cap seller and the Monkeys". Some times I have to repeat it twice. Every time she enjoys the story as if she is listening it for the first time. I wanted to post the story before only, but some other works did not allow me to.
Now I am here with the story which is my creation according to my need to keep my daughter away from few dangerous things. And just to make her eat food I add about the diet also in the story.
Please give your time and read the full story to encourage me to write in the future(If you really feel I can write!)
Once we get into the bed, she says "shock story mamma".  Are you wondering what is this shock story. You will come to know once you go through the story. Actually I started a very short story and it pulled on. Read it. Its universal and you can change the situations as per your need.
My story starts here, and I am writing the same words I tell her.
There was a boy (no name for the boy, my daughter does not want a name!) who never listened to his mamma, pappa, didi and naani. One day he got up from the bed and wanted to watch TV in the morning.
He went to the kitchen and asked 'Mamma, can I watch TV?(Very good boy!)
Mamma told 'No, you should not watch TV in the morning. You should (my daughter is perfect to say these now) brush your teeth, take bath, do puja, have breakfast, get ready and go to school'
The boy did not listened to her. He went to the hall, and touched the switch to on the TV. He got shock and started crying. (My daughter will tell same like Housefull story no ma?)Mamma took him to the doctor. Doctor asked what happened. Mamma told about the shock. Doctor gave him two injections (no logic, just to scare my daughter to be away from the switches).
Doctor asked the boy whether he eats all the vegetables and fruits and does he drinks milk or not. The boy answered yes I do, I eat everything mom gives. I like Sai bhaji(Green leafy veg curry) and Veg. Juice Pulao in which all the green leaves and most of the vegetables are added.And I love the Tomato and carrot soup mom makes. I always take the rice items she packs for me. He added that his favorite desert is Fruit and cream which mom gives him once a week.
Doctor was happy and gave him a toy car to play and sent him home.
(This was the story I told her the first day, so she has kept the name as 'shock story') Then I went on adding the stories).
Next day  mamma had kept the incense sticks in the puja room after her puja. This boy wanted to do also. He asked the mother. When mom told no, he did not listen. He took the sticks and started playing, and got his fingers burnt. Mamma took him to the doctor again., Doctor applied some cream and gave him a bitter medicine to take and sent him. (My daughter loves this bitter medicine story as she loves to take the medicine).
Next day his didi was doing some art work using scissors. The Boy went and asked her to give him also the scissors. Didi told him "its not for small kids. When you grow big like me, you can also use it." But the boy did not listen, he snatched the scissors and started cutting a piece of paper. His finger got cut and it started bleeding. Seeing the blood, boy was scared and started screaming and crying loudly.Mamma and Pappa took him to the doctor. Doctor put the bandage and gave him one injection.
After few days, mother was doing some work in the computer. This boy also wanted to play in the computer. Against mother's No also, he did not listen and sat with her to play. After some time his eyes started burning and water coming from his eyes. He pressed the wrong key and spoiled the computer. Mamma was very upset. She called him and told him to be a good boy and listen to the elders. He was quite.
Next day didi was playing her cycle. The boy too wanted to play her cycle. It was big for him, but he tried to climb and tried to ride the cycle. He fell down and broke his head. Mamma and Pappa rushed to the hospital. Doctor put him the stitches and gave injections. He told him not to goto the school for a week and have only bland food. And doctor was very upset for this naughty boy who never listened to any one. He told him not to be so naughty and listen to the elders at home.
The boy came home and started thinking 'why everyone calls me naughty? Am I really naughty?  From now, I will listen to the elders and try to be a good boy.  And he changed him self.
Mamma prepared nice Kichadi for him as per doctor's advice. 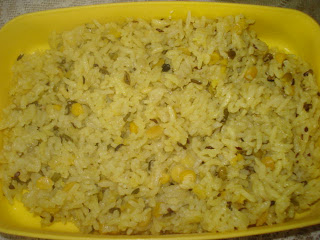 Rice - 1/2 cup
Mixed dal - 1/2 cup
(Toor dal, Yellow moong dal and broken green moong)
Cumin seeds - 1 tsp
Ginger paste - 1 tsp
Pepper - 6
Salt to taste.
Ghee - 1 tbsp
Warm water to cook the rice.
Wash the rice and dal. Drain and keep aside for 15 minutes.
Heat ghee in a cooker. Add cumin seeds. Fry for few seconds. Add pepper and ginger paste. Fry it for half a minute. Add the rice and dal. Mix and fry for some time, till the rice changes its color. Now add the salt and warm water double the rice level. Close and give two whistle. You can make it outside also. Let it cool and serve with paapad, pickle or curds.
After two months,  the boy was celebrating his birthday. The doctor also came for the party. He was happy to see the boy and told him "Arre, you did not come to my clinic for two months. You have become a very good boy". Doctor gave him toys, chocolates and many gifts. Everyone clapped for the boy.
You should see the twinkle in my daughter's eyes! for this last sentence. And she too claps with smile.
You can change the situations and make your own story. This story has worked for me. She listens to me for few things at least.
Sending this to a very unique event where your writing skills are polished :
Of Chalks and Chopsticks - 3 by sra of when my soup came alive  and linking it to  Aqua's post
Please leave the comments about this story.
Keep Smiling,
Posted by Nivedita Thadani at Monday, July 26, 2010 8 comments: Links to this post 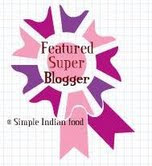 My interview in EC's blog

My blog is featured in 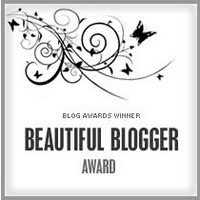 Will you be happy to come back and settle down in India??

if you are "a stay at home wife", you would like to call yourself a